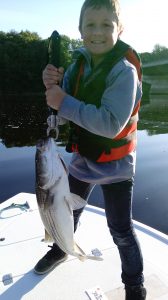 Fishing for striped bass was pretty good along much of the Maine coast this past season and that angling success has added up to another productive year for Snap-a-Striper, the ongoing data collection program in which CCA-Maine and the Gulf of Maine Research Institute (GMRI) are collaborating.

Almost 300 photos of stripers with Snap-A-Striper data cards in place were submitted to GMRI scientists via email by anglers, captains and guides during the 2018 season, along with the heads of several legally harvested bass. A number of fish photos were also submitted anonymously by anglers participating in a catch-and-release striper fly fishing tournament. Fish photo submissions started in May and continued through September and came in from as far south as York and as far north as Old Town.

As announced last spring, CCA-Maine is again rewarding participating anglers, captains and guides for helping to make this important fishery research program a success. The list of lucky winners for 2018 who were awarded Visa gift certificates follows:

GMRI scientists will digitize the 2018 fish photos and add them to a collection of some 1800 photos submitted over the past five years. The photos will be entered in a statistical analysis program and preliminary photo results will be determined over the winter. Chemical analysis will also be conducted on more than 60 striped bass otoliths (ear bones) taken from heads submitted to GMRI over the last few years.

The data resulting from these studies will help GMRI scientists determine the origin (locally spawned in the Kennebec River watershed, or migratory) of stripers in Maine waters, information that can improve management of the striped bass resource that is so important to the state’s economy.

CCA-Maine very much appreciates your interest in Snap-A-Striper. Tight lines and we look forward to your continued support of this important “citizen science” program in 2019.

This entry was posted in Uncategorized. Bookmark the permalink.