To all of you in attendance at our Annual Meeting on 1/24, thank you for your support. For those who couldn’t be there, it was a terrific evening with fantastic auction/raffle items and the usual incredible food provided by The Harraseeket Inn. The following Board seats were nominated and approved for another term:

Mac McKeever presented a review of CCA-ME’s efforts over the past year (click here to download pdf) and a look forward to areas of focus for 2013.

Thank you to the following donors that helped with the event by donating some great items.
LTs inc.
Fish Art Maine
Fish in the Garden
Dick Anderson
L.L.Bean

Posted in Uncategorized | Comments Off on Thank you

The State of Maine, Department of Marine Resources is hosting a public meeting to discuss public concerns over the status of striped bass in Maine. This meeting is intended to discuss issues that recreational anglers, conservation groups, and resource managers believe are important to restore and sustain both native and migratory striped bass populations.

Also of possible interest is a St. Croix alewive-issue recap for the coming legislative session. You can find more information:

Posted in Uncategorized | Comments Off on Striped Bass Scoping Meeting

There will be lots of great raffles (L.L. Bean products, beautiful prints, and fishing gear), complimentary appetizers, and a cash bar.

With the generous support from the Harraseeket Inn, we are offering a chance to win the Perfect Gift Package! A chance at an overnight stay with dinner and champagne at the Harraseeket Inn along with a $50 L.L. Bean Gift Certificate!

Take a look at this video featuring east coast striper expert, Alberto Knie. He’s been fishing for stripers for a very long time and offers up a sobering viewpoint based on his historical perspective. I had the pleasure of working with Alberto on a few projects years ago–he’s a smart man and a great angler–someone to definitely pay attention to.

We have some very good news to report, indeed. The Atlantic States Marine Fisheries Commission’s (ASMFC) Menhaden Board voted to implement a 20% reduction in menhaden harvest starting in 2013. CCA-Maine delivered verbal testimony at a public hearing back in October and submitted written testimony in support of drastic measures aimed at replenishing menhaden stocks which had plummeted to their lowest level in recorded history. Below is a formal statement from CCA regarding ASMFC’s vote on the matter.

CCA Statement on Action Taken Today by the ASMFC Menhaden Management Board:

CCA has been fighting this fight for 20 years as Atlantic menhaden have always been one of the most important species in the ocean to CCA. The action taken today is an historical victory for recreational anglers, conservation-minded citizens and the most important fish in the sea – menhaden. For the first time ever, the Atlantic menhaden fishery is finally being managed. The key in today’s action is that the ASMFC made a decision to manage menhaden as part of an ecosystem rather than solely as a food fish. This philosophy is a major step forward for improving the marine ecosystem for anglers from Maine to Florida. It also is an approach that should be followed by decision-makers as they determine the best way to restore and protect marine resources.

Mark your calendar for CCA-Maine’s annual meeting – Thursday, January 24th from 5:30 – 7:30 at the Harraseeket Inn in Freeport.

Enjoy the Harraseeket’s wonderful food and hospitality while meeting up with your friends to discuss how we can continue to help make Maine’s coastline a better place for all of us.

As the event nears, more information will be emailed as well as posted here.

Thank you for your continued support of CCA-Maine.

Posted in Uncategorized | Comments Off on Save the Date! January 24, 2013 CCA-Maine Annual Meeting

Menhaden, one of the key forage species in the Atlantic Ocean, have never been effectively managed. As a result, the stock is now being seriously overfished and has declined to near-record low levels of abundance. It is critical for the ASMFC to enact a new management plan which reduces fishing mortality on menhaden by at least 25 percent through the implementation of a coast-wide quota and a mandatory catch reporting system for all commercial harvesters.

The hearing in Portland will be conducted by the ASMFC and the Maine Department of Marine Resources and is scheduled for Wednesday, October 17 at 5 p.m. in the Casco Bay Lines conference room at the Ferry Terminal, 56 Commercial Street. CCA-Maine President Mac McKeever will deliver CCA’s official position at the hearing.

We encourage all CCA-Maine members and anyone else interested in marine conservation to get involved in this major effort. Here are three ways you can help make a difference:

1) Attend the public hearing in Portland on Wednesday, October 17 and speak up for menhaden conservation. The in-depth Angler’s Guide to Amendment 11 prepared by CCA (attached) includes a preface under the heading “Tell The ASMFC” listing six key points you can make at the hearing

3) Submit those same key points in writing to the ASMFC at mwaine@asmfc.org  (yes, mwaine is correct!) using the subject line Amendment 11 to Menhaden Management Plan

We’ve seen before how your involvement can make a difference, so we are counting on you again. Thank you for your support.

ASMFC votes to give public its say on menhaden

ALEXANDRIA, VA – Tangible management of menhaden in the Atlantic moved
another step closer to reality this week when the Atlantic States Marine Fisheries
Commission (ASMFC) voted to send a series of management options for this critical
forage species out to public hearings.
Menhaden management has long been a sore point among conservationists as intense
commercial harvest of the species in the Chesapeake Bay has added to factors believed
to be negatively impacting striped bass and other gamefish all along the East Coast.
The primary industrial harvester of Atlantic menhaden, Omega Protein, has never had
its harvest effectively restricted and stands as one of the very few commercial fishing
operations in the country to successfully avoid management measures that might impact
its bottom line.
There is also a completely unregulated bait fishery that targets menhaden throughout
its East Coast range. Comprised of boats of all sizes, from large mid-water trawlers to
small skiffs, it supplies bait to both the commercial and recreational fishery. The quantity
of menhaden harvested by that industry has never been comprehensively assessed, but
it is undoubtedly significant. In addition, the fishery is believed to be expanding as
northeastern lobstermen seek a substitute for the more strictly regulated, Atlantic herring,
which is decreasing in abundance.
The most current menhaden stock assessment showed the stock was undergoing
overfishing and abundance estimates were at the lowest level ever recorded. Current
science indicates that the menhaden spawning stock biomass is at about 9 percent of a
stock that is not subjected to any fishing pressure. With the vote this week, the ASMFC
has put into play management options that could increase the spawning stock biomass
to15 percent or more.
“This is the grinding process of management,” said Richen Brame, CCA Atlantic
States Fisheries Director. “The science is finally catching up with the problems anglers
and conservationists have been talking about for a long time, and now the process can
move forward. The fact that these options are going out for public hearing is significant,
but it is a slow grind to get where we want to be with this stock. You can bet the
harvesters think this is a significant development.”
Whatever regulations are ultimately adopted will be interim measures that will likely
be in place for three to five years until ecological reference points, generated from a
Multi-Species Virtual Population Analysis can be produced, which will require stock
assessment updates on bluefish, striped bass, weakfish and menhaden stock. When that
analysis is conducted, it is very possible managers will have a much better idea of the
population of menhaden needed to fully serve as the critical forage base for those popular
sport fish.
“Almost everyone who has spent time fishing in the Chesapeake has seen how the
industrial boats, aided by spotter planes, can wipe out whole schools of menhaden,
removing them completely from the food chain,” said Frank Kearney, chairman of
CCA Virginia’s Government Affairs Committee. “For a long time, anglers have felt
powerless to impact the menhaden management process against a very well-connected
and financially powerful company. Now that these measures are going out for public

hearing, it feels like we have a chance to inject some sanity into this fishery and begin to
manage it for the greater good, not just for the good of one company.” 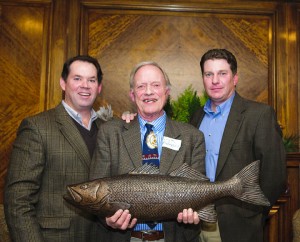 For more than 50 years, Anderson’s conservation work has had a major impact on the health of Maine’s marine resources, making the outdoors a better place for all of us.

FREEPORT, Maine, December 8, 2009 — As a passionate outdoorsman and conservationist, Dick Anderson enjoys digging for surf clams, casting to shad and striped bass on a running tide, calling turkeys into shotgun range, or leading Audubon cruises to study bald eagles on the Kennebec River. But for more than 50 years, most of Anderson’s waking hours have been spent addressing Maine’s most pressing marine resource problems and doing so as a volunteer.

In recognition of his longtime and enthusiastic devotion to marine conservation, Anderson was honored with a Lifetime Achievement Award by the Coastal Conservation Association-Maine (CCA-Maine) during that organization’s annual meeting on Monday December 7th at the Harraseeket Inn in Freeport. Pat Keliher, Director of the Bureau of Sea Run Fisheries & Habitat, Department of Marine Resources, presented the award to Anderson.

“Conserving Maine’s natural marine resources is what really motivates Dick Anderson,” Keliher said in his presentation remarks. “And when this exuberant man gets behind a cause, it is next to impossible to slow him down. He has worked on very complicated issues like fish passage, habitat protection and netting regulations, and he has been instrumental in or directly responsible for some of the most important marine resource decisions in Maine over the years.”

“Dick Anderson’s professional credentials are certainly impressive, but he also has a special innate ability to get those around him fired up about a cause,” Keliher continued. “One of CCA-Maine’s greatest accomplishments was the removal of the Smelt Hill Dam on the Presumpscot River. Although that battle dragged on for almost five years, Dick Anderson worked tirelessly to rally the troops and promote the project goal of restoring diadromous fish to a river that was nearly destroyed by 200 years of industrial use. It was Dick Anderson at his best – not giving up until the dam was finally breached.”

Anderson was a co-founder of CCA-Maine in 1991 and became the organization’s first executive director. He played major roles in implementing Maine’s initial menhaden netting ban in the Presumpscot River and in securing passage for diadromous fish up the Presumpscot through removal of the Smelt Hill Dam. Anderson also led the charge to achieve game fish status for American Shad in Maine’s tidal rivers and successfully campaigned for bait netting regulations to help stop the indiscriminate killing of striped bass and diving birds on the Kennebec River. As a young fisheries biologist working for Maine IF&W, Anderson was the first person to expose the negative effects of DDT spraying on landlocked salmon in Sebago Lake.

During the Anderson Award ceremony, a check for $1000 was presented to the Maine Department of Marine Resources for striped bass tagging efforts on behalf of CCA-Maine and the Yarmouth Boatyard as a result of proceeds generated from this past summer’s Royal River Striped Bass Tournament.